Hindhead and The Devil's Punchbowl

Near: Haslemere Level of event: National

This years Southern Championships, to be held on Hindhead and the Devils Punchbowl combines the SN Trophy (https://www.southernnavigators...), the SLOW OK Nuts Trophy (http://slow.org.uk/about/histo...), the British Army Inter-Corps Championships and is part of the 2018 UKOL (http://www.ukorienteeringleagu...).

* Postcodes are not very precise in some areas, so don't rely on them for an exact location. 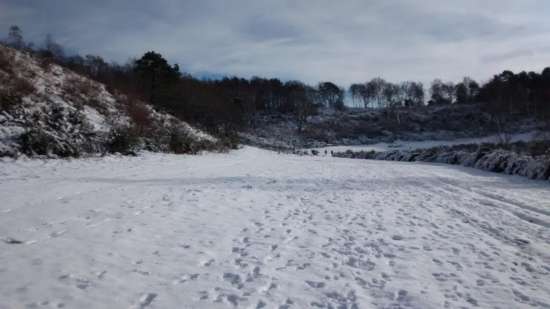 Winter at the punchbowl 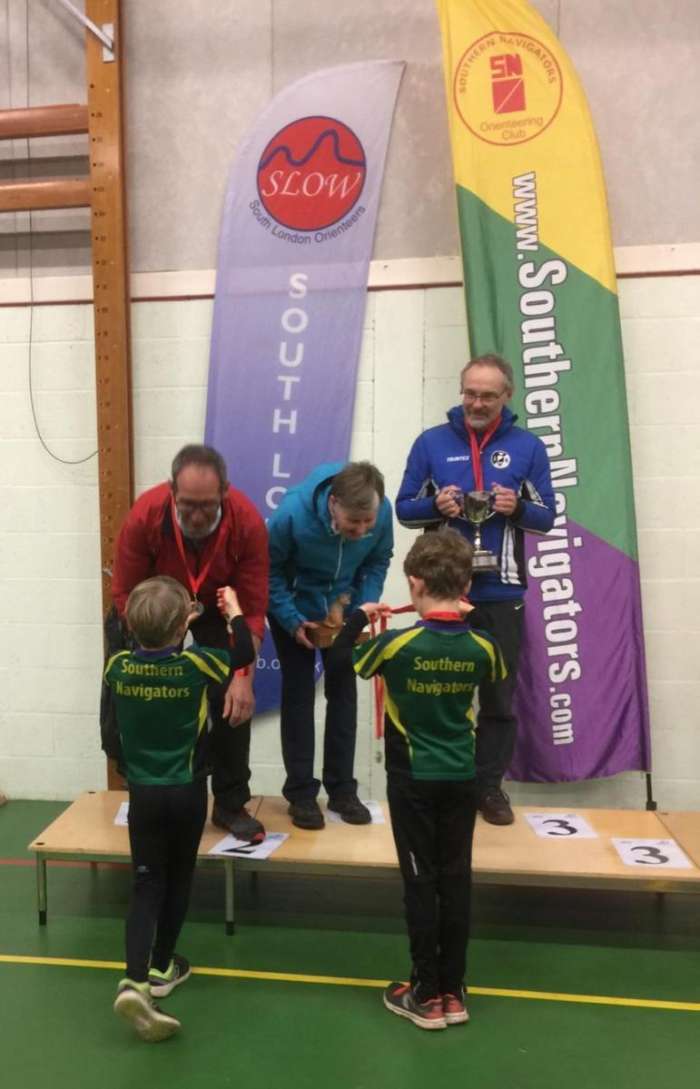 I managed to catch up with Tony Thornley, winner of yesterday's M70 course, it seems races haven't got any easier, attached results from and course from the Quartermaine International May 1973,12.3km +2000 feet. Some great names in the results here, and maybe a similar leg (see map) to what you may have run yesterday. Tony mentioned he thought "part of the course was in Mike Murray’s back garden so he did have some advantage."

We are very grateful for the support of several people and institutions.

A huge thanks to the SN and SLOW helper team

Most of us orienteer just for our own pleasure and satisfaction, and even though it's the best sport invented, it is not widely understood in the UK. So we have only our families and fellow orienteers to appreciate our efforts completing courses. I am very aware that these Area Champs were tough, as they are supposed to be, so on this occasion may I add my congratulations to those of your family, metaphorically shaking each of you by the hand, looking you in the eye, and saying I appreciate your achievement. Well done. Thankyou for coming. And yes, there were also some really impressive times by top orienteers across the classes, and some closely decided races too.

There is a large store of rules, guidance and advice for planning, and a big document on Area Championships. I tried hard to match them, and if I missed a bit it is despite rather than because of the efforts of the rest of the team. I got an enormous amount of help and support from Steve McKinley, Philip Gristwood and Paul Fox. The biggest credit for putting on any orienteering belongs to the organiser. They can delegate things (I suppose Steve does delegate, but his most common answer seems to be “yes I'll do that”) but from the car parking, through writing the details and updating the map for forest work, to the launch of a missing competitor procedure, it was Steve who carried the responsibility. Didn't you think the assembly and start were great? The controlling team, Philip and Paul were terrific to work with. Their conscientious notes made over many visits to the area and our subsequent discussions made a real difference to me, the courses and I think to your experience. They were heroic over the weekend too, checking 105 controls using good score event technique. I got lots of help from my South London clubmates on the weekend, and amongst them I particularly thank Gordon Parker, Karen and Andy Jones, and my wife Sarah Brown. They were all there placing controls on Saturday, all out before sunrise on Sunday, and all there sorting equipment under the Sports Hall's external lights on the Sunday once everyone else had gone.
The responsibility an orienteer takes for their own route choice is one of the things that characterises our sport. It is not something everyone likes, so whilst orienteering is a sport for all it will surely never appeal to all. You need to be a certain sort of person. It is particularly what is expected in sprint, and in long distance races such as on Sunday. So that was a main thing I thought about.
The other highlighted characteristic of an Area Champs is to test physical endurance in hilly terrain. That wasn't difficult in the spectacular setting of Hindhead Common and The Devil's Punch Bowl, but doing it appropriately was one aspect where I particularly benefitted from the advice of the controller. I hope you felt that aspect of your course was OK.
Now even if you had not been walking up from the train station or car parks in Haslemere I would have wanted the start and finish near Assembly. With the walking in, it was a straightforward choice. It was then a case of the course length deciding where each course could go. If it could go where the A3 used to be it did because that story is so remarkable and the views are so good. If it could also go into the Punch Bowl it did because the forest there is so good. And if it could get beyond the former Youth Hostel (the out-of-bounds in the middle of the Punch Bowl) for the lovely runnability like the New Forest it did. I did try for climb ratios of 5% initially, but it quickly became clear that relaxing that target allowed better courses. It allowed the four longer courses to visit Invall Hill (in the south-east) via a left or right choice around the big southern out-of-bounds, and to go further down the slope of Boundless Copse for the common leg 227-228. And also for the two longest courses to visit the west side of the Punch Bowl for 212, 216, 209 and 208.
There were 20 courses planned, but the shortest senior technical course was not needed. Climb ratios of the ten courses visiting the Punch Bowl varied from 5.5% to 6.8%. The other nine varied from 3.0% (white, yellow) to 4.9% (M14A, M16B.)
I am pleased to see many routes loaded to Routegadget. And also that the Routegadget team were both running on Sunday (check their results on M21E and M55L.) Even if you are only an occasional Routegadget visitor I think you might enjoy checking it for this event – apart from your own course perhaps have a look at the legs to Invall Hill and 227-228 (courses 1, 2, 3, and 4) and the two below.
Courses 1 and 2 went to 212 on the west slope of the Punch Bowl from control 203 between thickets in Boundless Copse (many courses visited this). It was intended to offer an energy conserving but slower run round the rim as a choice to the direct down and up, but I'm not sure anyone ran round. Perhaps you need to be older (and less good on hills, like me) to see that as an option?

All three 1:15000 courses, and courses 3 and 4, had a long leg coming south in the Punch Bowl late in the course, starting from the thicket at 226, and finishing at a control on the east-west slope below the old road. There are several variations on straight past the left of the Youth Hostel, a route left along the old road, and a seemingly not-so-easy to see route on the track to the right that I think is best.
Anyway that's that done. Our family efforts now focus on Sarah completing a project funded by Sport England and SLOW making short videos, each featuring a GB team member showing an aspect of orienteering, and using these with teenagers at races. Look out for the trailer next month.

After working with Philip on Ash Ranges last year I was happy to be his "legs" and back-up brain again in 2018. It has been a true delight to explore the competition area during a glorious autumn, and it was a pity the sun did not shine on the day of the event itself. Paul (planner) thought hard about the shape of his courses and possible route-choice legs, and as controllers we spent more time worrying about circle-cuts and line-breaks than we did about the nature of the navigational challenge posed. Some competitors may have noticed the physical demands of the area (!), but with the two maps of Hindhead Commons and Devil's Punch Bowl at last joined astride the old A3, there was an opportunity for some interesting longer legs, and a chance to visit a variety of terrain for most of the senior courses. It was hard to gauge the expected winning times (based on best in class) from the few recent events on either half of the area. It's clear that we were at the upper end of expectations on many courses, and with a big spread of times, but most people I spoke to after their runs had clearly enjoyed the challenge. Checking and waking up controls via lengthy control-picking routes on both Saturday afternoon (until after sunset) and Sunday morning (from before sunrise) gave me a good workout. If you got tired ascending the north wall of the Punch Bowl, or the eastern slopes of Boundless Copse and Invall Hill, I do know what it feels like, having visited all of these areas on three occasions in the days leading up to the event. At least I was able to repeatedly find Paul's planning tapes from his precise descriptions based on height above ground and species of tree - it just became more of a challenge when all the leaves fell off (twigs of birch, beech, and ash all look quite similar from November to March). Finally I'd like to say a massive thank you to Steve (organiser), his assistant Adrian, and all the volunteers from both SN and SLOW (plus the GO computing team) who pulled together to make this event happen. A true collaboration amongst friends, united by the long-awaited opportunity to stage a major event on the newly combined map. I sincerely hope we will be back again one day. 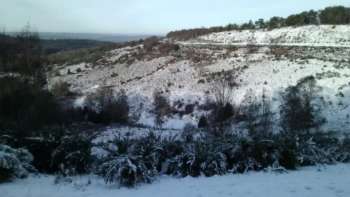 North across the Punch bowl 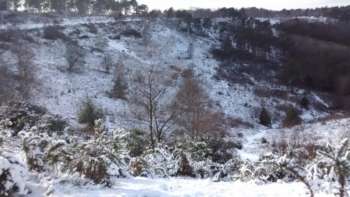 Safety and Risk: A comprehensive risk assessment will have been carried out by the organiser. Competitors are responsible for their own personal safety and for assessing their own abilities to complete the course. Neither Southern Navigators, the landowner or British Orienteering can be held liable for any accident or other incident arising while undertaking the event. Participants take part at their own risk and are responsible for their own safety during the event - including clothing appropriate for the conditions, and if required, a means of summoning assistance (e.g. phone or whistle).

After forest orienteering, please check thoroughly for ticks and remove immediately if you find them. Lyme Disease is on the increase in the South East!

Covid-19: Before attending any orienteering activity, all orienteers (including officials, volunteers and coaches) should self-assess for symptoms of COVID-19. If you, or anyone you live with, have one or more of these symptoms you should not attend any sporting activity, even if your symptoms are mild.

Insurance: All participants are covered by the British Orienteering third-party liability insurance policy. (NB: This is not a personal injury policy).

Privacy: If you enter an event or activity for which we publish results your name will appear in the results section of this website. In addition we may seek to have the results published elsewhere, e.g. by local newspapers. Read our data protection page to see how we look after your personal data.